There's Something Nasty in the Woodshed 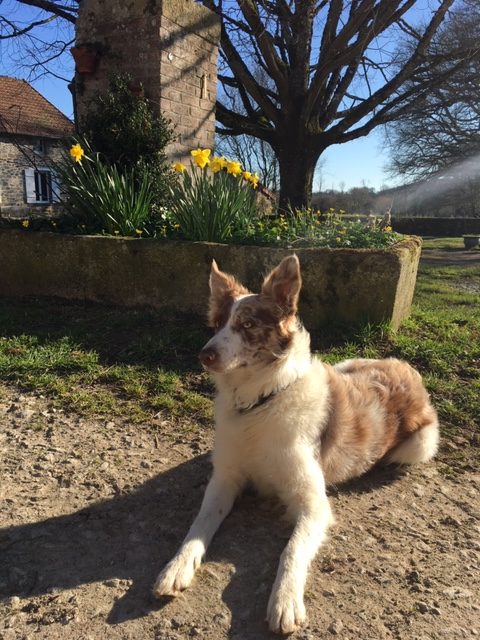 At Stansted Airport a couple of weeks ago, a man on the Liz Earle concession in Boot’s asks: ‘How are we today?’. Me: ‘We is fine.’ Ignoring the grammatical boomerang, he persists: ‘Can I help you? What type of skin do you have?’ Me: ‘Medium.’ Slight furrowing of the brow. ‘I don’t know what that means.’ Me: ‘It means I’m normal (sotto voce) you moron.’ To be honest, I don’t actually need any Liz Earle Superskin Moisturiser with Natural Naroli because my pores will be clogged with mud and dog hair until mid-March, the reason being, I’m in Limousin playing housekeeper on a farm during the very hectic lambing period.

Is that afterbirth the dog’s eating?

For almost three weeks, I am Betty, Maid of All Works, aka domestic drudge. My daily duties are legion: I make breakfast for aged Ps, let the chickens out and collect the eggs, make breakfast, make cake, make busy with the hoover, put on a big load, bottle feed a lamb with a death wish, haul a tonne of logs in from the woodshed, make lunch, wash the boot room floor, clean the bathroom, assist with sheep tagging and vaccinating, fluff up the hay, stop the dog eating sheep’s afterbirth (it gives her the runs), make dinner, put aged P in the shower, and finally, put myself into bed, perchance to have nightmares about wiping my arse with Izal toilet paper.

Life and death are ready to smack me in the face whichever way I turn. For example, this morning, the mole man (squinty eyes and a long nose) gaily bonjoured me then skipped out into the field for a spot of killing. Then, I was interrupted during my morning mopping to help drag a dead sheep out of its pen ready for the knacker man to pick up. Meanwhile, next door, H. was elbow deep in a ewe’s fanny (big lamb, tight vagina). It eventually plopped out and I sang ‘Isn’t she lovely?’

Yesterday, there was an ugly incident at the chicken coop. I was feeding the chickens when a 15-strong herd of hungry rams came at me from the next door field. They galloped into the feed shed and cornered me and my bucket. One particularly aggressive Suffolk flew at me with its ugly head. I shouted ‘fuck off’ and lunged at it with a kung fu style kick (not easy when you’re wearing Wellington boots two sizes too big), and the ram retreated with a poo/wee combo. Talking of poo, after my ram roasting, I had to go with H. to collect some sheep dung for worm analysis at the vet’s. H. only had one rubber glove on him but luckily, I had an old dog poo bag in my coat pocket so he was able to fashion a mitt and complete the dung collecting task (somewhat of a challenge as the dung was a bit sloppy). The receptionist at the vet was less than impressed when he plonked the poo bag down on her counter next to a complimentary bowl of lollipops. ‘Zut alors’, she seemed to be saying with her eyebrows but H. simply laughed. Farmers eh!

New-to-me fact: llamas are exceedingly stupid. One on its own in a field of sheep will think it’s a sheep and adopt stupid herd behaviour. But put another llama in there and it will wise up and know that it’s not a sheep and start behaving like a llama. Fascinating! The farm’s resident llama, Larry, is a singleton and so believes itself to be one of the flock. Larry isn’t the only one that’s confused. For six years, H. & M. have been convinced Larry is a girl (despite having a boy’s name – given to her by previous owners). Then, one day recently, M. saw a winky-like protuberance emerging from Larry’s undercarriage. So, Larry would appear to be male after all. Whatever, he’s a bit miserable right now. With all the sheep residing in the farm’s maternity unit for at least two weeks, Larry doesn’t know what to do with himself. He spends his days wandering around the farm yard or standing mournfully by the barn entrance.

On my final day down on the farm, I help M. mark and tag the lambs. This involves dangling the lamb while using a staple gun to attach two plastic tags to its ears, weighing it, attaching an elastic band to its tail so that it drops off and, finally, spraying it with its ID number. M. does the dangling and I do the rest but when it comes to the spraying, the lamb is wriggling and I’m all of a dither with the can. The poor lamb’s number 35 ends up as a big blue blob while poor M. is left looking like a Smurf. Oh how we laugh! And finally, we pile all of the off spring into the lamb mobile and transport them to the fields for their very first taste of grass, closely followed in the cattle truck by their anxious mothers. Bye bye sheep, I’ve learnt a lot about you, your water bags, your afterbirths, your four stomachs and your prolapsed vaginas. It’s been a pleasure.