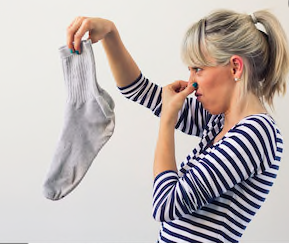 With so much time on my hands I am noticing the little things in life, like the aroma of soaking socks. A bit of background: I have faulty stitching in my walking boots which means that every time I go for a walk in inclement weather, I end up with a dirty left bunion and an even dirtier right big toe. I would take the boots back to the shop but their guarantee has probably expired and anyway, I just might kill someone if I have to return a second time to BLACK’S. These boots are the replacement pair of some other boots (keep up) that I bought in the summer of 2019. They started leaking very early on in our relationship at which point I took them back to the shop. The shop assistant, let’s call him Sven (for Scandinavian he was), asked me what I’d been wearing them for….. Duh!! ‘Walking’ said I. After asking if I had a dog (like that made a difference), he opined that leather boots were probably a better choice for walking. ‘So all of your fabric walking boots, for which you’re charging, in some cases over £100, are not fit for purpose are they?’ I retorted with a gggrrrr! This man was an idiot and should be sacked for disloyalty to the merchandise (despite being a Viking and aglow with manliness).

Anyway, this second pair has lasted longer but are now facing a formal discharge by their owner. I am indeed considering a leather pair of boots if only to save my poor woollen socks from over-washing and stinking out my flat with their farmyard pungency. Also, I think there’s something a bit spinsterish about washing socks; it has overtones of lavender gussets and hairy chins.

Looking for a cheap thrill for those long Covid nights? If you have a spare bed in your home, don’t leave it empty and forlorn – throw caution to the wind and get in. Sleeping in another bed in another room can make you think you’re on holiday (if you’re a little deranged and/or bored). Currently, I’m having a fortnight in the Scilly Isles. It’s lovely. I have a lovely south facing view and some orange polyester curtains. Why not combine it with one or two new ablutionary habits e.g. if you’re used to a morning shower, why not mix it up with an occasional strip wash (you’ll need a flannel). Or, if porridge is your breakfast milieu, go rogue with some Kedgeree, and eat it in bed. It may seem crazy but it’s really quite refreshing. And it might make you want to have sex with the window cleaner.

I’m currently conducting an experiment into garden snacking; who likes what to eat and where. My aim is to forge a friendship with the tits and other diddly birds. I feel that magpies and seagulls have the wherewithal to access burgers and spaghetti bolognese at will from rubbish bins whereas titty birds need an occasional cream cracker on a Willow Pattern saucer. So, I have a wooden thing that hangs from the tree and makes a good feeding platform. I’m currently going through my pastry phase (salmon en croute is favourite) which means there’s always scraps of rough puff to offload on my little friends. I’m slightly concerned about buggering up their beaks with all that sticky lardiness. No one wants to be a bird murderer, after all! But there’s only one way to find out. I put a few remnants out yesterday and, despite keeping a vigil, saw no creatures, large or small, tucking in. However, this morning, I examined the feeder and am pleased to announce that the pastry has gone. Who has eaten it is another question. My garden squirrels are like Chinese acrobats and can hang upside down while stuffing their face or maybe it’s those pesky magpies. Or maybe, just maybe, my pastry diners are rats who, I believe, will eat anything including people if they get the chance. I’m going down this alley because my neighbour has recently been visited by a rat that ate its way through the wall, then polished off half a pound of butter and a cappuccino layer cake. I reckon a rat that’s maybe into Parkour could scale the shed, run along the tree branch, leap onto the buffet table, gobble up the pastry, then finish off with a double somersault back to ground. Whatever, I’m taking no chances and am now wearing bicycle clips in the garden.