Going Nuts for Brazil – an Odyssey of Six Parts 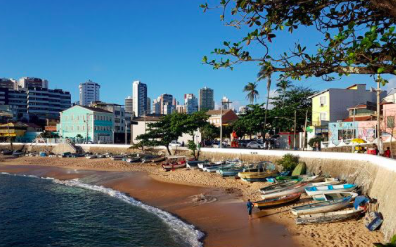 Part Five – Hold onto your handbags – we’re in Salvador

I arrive in Salvador gagging for some culture, maybe even a bit of a booze-up. I’m ready to shake my Samba arse or maybe go legs akimbo with a spot of capoeira. But first, I need a bloody good hose down – I’m dusty and a bit crusty. I hop into a taxi and flash my phone at the driver indicating the hotel I’ve pre-booked. According to Google Maps, the seaside district of Rio Vermelho is pretty close by but Salvador is a big city of 2.5 million souls and to say it’s congested would be peddling an under-statement. We make slow progress through the city streets, over flyovers, pass by what look like hillside favelas and circle impossibly large roundabouts. Somehow, we avoid running down the countless hawkers who mill around the road junctions thrusting nuts, nick-nacks and chewing gum through the windows of idling cars.

Eventually, we arrive at my hotel which is up a side street just off the seafront. I had reckoned that this being one of Brazil’s biggest cities, a lot of people would speak English. Wrong! In the clean and modern reception is a very handsome young man with a row of shiny braces. I ask him if he speaks English and he laughs. His female colleague, who’s sat next to him and who also has a row of sparkling metalwork in her gob, also laughs. I tell them my name and am shown to my penthouse apartment. Remember Paula’s Pousada with its polyester decked bunk beds, cracked bathroom tiles, and non-flushing WC? This is the opposite. My eyes are dazzled by the sheer luxury of my hotel boudoir for the next three days. I have pristine white bedding, purple scatter cushions and mood lighting, I have a kitchenette, a walk-in shower and a flat screen TV. A corner room, it even has two views: from one window I can watch the waves crashing onto the nearby sandy beach; from the other I can watch next door’s pizza chef smoking a fag on the fire escape while an overweight woman in a boob tube pegs out her husband’s y-fronts.

A couple of hours after my arrival, I’m joined by Claudia, my new best friend and translator. Claudia, who I met at Paula’s Pousada, is a part-time chiropodist and waterworks employee at Sao Paolo council. She knows a lot about oil spillage (along with bunions, naturally). By the end of our three days together, I will also know a lot about oil spillage. She tells me there’s been an oil tanker incident off the coast of Brazil and injured and dead wildlife have been washing up on all the beaches up and down the country. That bastardo Bolsonara denies the spill is in Brazilian waters, says Claudia, but it’s hugely impacted on tourist numbers. No-one wants to swim in claggy brown oil, obvs!

Claggy brown oil is not the only thing to put off the tourists. The first thing I need to know about Salvador, Claudia tells me, is that we stand a good chance of getting mugged. My guide book concurs; it says tourists should NEVER go off piste, and if approached by young men brandishing machetes, should resist the urge for heroics. I remember a story I’d heard about a British couple who followed their Satnav into a favela by mistake and were promptly shot. Getting ready to go out that night, Claudia removes her jewellery and shoves her money down her pants. She implores me to do the same. We walk (a little uncomfortably) to a nearby Italian. It has red and white checked tablecloths and candles; oh, and two menacing security men who hover around our outdoor table carrying what look to me like machine guns. I fancy a creme brûlée but all the hardware and glowering puts me off and we make it an early night.

The next day we do a few churches (Baroque, lots of gold, lots of nuns), sample Acaraje, the local Afro-Brazilian street food (blackeyed pea ball – very hot, very messy), check out the capoeira (lots of leg cocking in a circle while avoiding kicking anyone in the face), and end up in Porto da Barra, a well-to-do neighbourhood that has a lighthouse, a great spot where people gather to jam, drink, and watch the sun go down.

We fancy a day trip to a beach but without the stabbings so decide to take a boat trip to the pretty island of Ilha dos Frades. The boat is rammed with cheery day-trippers dressed in colourful beachwear and carrying gigantic cool boxes. It’s only 9am but everyone’s necking the beer and caipirinhas like it’s the end of the world and when a Samba trio starts playing, they all go crazy and start doing the conga around the boat. On the island, we swim and sunbathe and eat a huge brown buffet. I let my lunch go down under a beach umbrella while Claudia combs the beach looking for oil. There’s a middle aged man sat with his back to me who has possibly had a surfeit of sun or a dodgy prawn, or just one too many caipirinhas. Anyway, I watch him casually turn his head to the side and vomit, a lot. Eventually, he’s down to dry heaving but I think it might be time to go home. Back on the boat, the Samba trio strikes up again although everyone is by now well and truly pissed so as the boat bounces through the water there’s a lot of lurching and quite a bit of grappling, especially during the Bossanova.

That night Claudia and I venture out for dinner in the neighbourhood. This time, my credit card is down my bra which is slightly more comfortable than having it nestled in my gusset. We find a table in a large square where groups of young, beautiful types are eating and drinking to the accompaniment of a live band. We’re sitting ducks for the usual hawkers who weave in and out of the tables with their bags of tat. I look at the menu and plump for fish and chips but the thing that arrives at our table is a deep-fried monster. On the menu it says it’s for two but really, this is a meal for four very hungry people. We can’t even eat half of it! Claudia gets chatting to one of the table hawkers, a skinny woman in her 60s who’s selling sweets. She’s wearing make-up and is well-coiffed but by the way she’s oggling our leftovers, I can see she would eat a scabby dog, given the opportunity. We tell her she can help herself. She whisks a plastic bag out of nowhere and swiftly scoops up the fish with her bare hands along with the by now cold chips – and even the salad – saying it will feed her and her husband for two days. There’s no shame in this transaction just a brief respite from grinding poverty.

On my last night in Salvador, I’ve been bumped out of my penthouse suite by a couple of newly-weds. I join Claudia in her windowless dorm for six. It feels like a coffin and the aircon is giving me cataarh but I can stand it for just one night. Claudia and I share a farewell beer in the lobby. As a parting gift, she trims my toenails and removes a splinter from my thumb with a diabetes needle. Cheers mate!