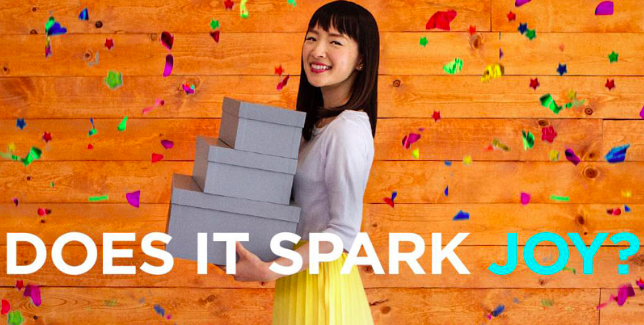 I am no Marie Kondo

I was introduced to the Queen of Anal Retention a while ago but, unlike ASMR videos (which I find completely hypnotic – especially the ones where they tap their pointy nails on a butternut squash or fiddle with plastic toiletry bags), Ms Kondo’s frankly inappropriate relationship with her clothing leaves me feeling like I want to reach through the screen and rip her arms off, fold them neatly at the elbow and stuff them up her presumably bleached, hairless arse. If I decide to become a full-time Victorian housekeeper, no doubt knowing how to maintain a streamlined linen cupboard that sparks joy into my otherwise hollow, gusset-strewn existence, will be a boon. Until then, Goodbye Kitty you tidy freak in a child’s body.

Only a fool handles polythene in a high wind

My back passage is full of asbestos – not a euphemism. This killer material used to be out of the way, on top of my shed where I never gave it a second thought except occasionally to think how ugly the corregation aesthetic is. The shed came down three years ago but the asbestos roof has been languishing down the side of the house all that time, waiting for my sorry arse to get rid. It’s been moved out of the way countless times and occasionally fallen over; bits have crumbled away to deathly dust, ready to be ingested by anyone lingering by my back gate. Then last week I thought, treat yourself Anna, go down the tip. I did a bit of research; the Brighton and Hove council website demanded I wrap the asbestos in two layers of polythene, restricting me to four bags, and requiring two forms of ID. It also reminded me asbestos is highly dangerous and should be handled with care and in the ‘proper’ gear. I was suited and booted thus:

. homemade face mask (made from old pyjamas) – doubles as PPE at BLM rallies

Top tip: never attempt to handle eight metres of polythene sheeting in a high wind. No sooner had I laid out the plastic on the ground than the wind would send it flying. I tried to pin it down with a spreadeagled manoeuvre but every time I stood up to lift the asbestos onto it, the wind would take it up again. Then I kept losing the end of the gaffer tape and my twice-gloved fingers were far too fat for the scissors which greatly impeded the wrapping process. Eventually, after two hours of tussling the job was done. The tip journey ensued; no-one asked to see proof of residency; they just directed me around the back of the dump and showed me where to sling it. My back passage is pristine. Hurrah!

I’ve never been very good at making pastry. My mother said I was too slapdash – it either came out grey and under-cooked or shrunken like an old man’s penis. Now, in true lockdown spirit, I have recently revisited this hole in my culinary CV to see if, with more mature fingers, I might now be able to master what, in my legion of cookery books, looks dead simple. Disaster. My ‘breadcrumbs’ clumped. I added too much water. I rolled too thinly. The result: old male member shrinkage and a soggy bottom. I’m happy to report this final failure has provided a Damascene moment; I have discovered ready made pastry and have been throwing myself into quiches and tarts with gusto. I can now produce a rudimentary cheese flan and have even branched out into vegetables. The above number has purple sprouting broccoli and asparagus tips in it – I know, I’m really going places, culinarily speaking (if you can ignore my negligent edges, although the thrown-together or should I say rustic look is favourite these days). Oh, and my magic ingredient is mustard powder – although handle with care as it makes the lips itch and the eyes puff up when applied to the face by mistake – but is delish when consumed in a tart. Bon appetit!